HOW A HAIRSTYLIST’S PENNY BECAME $10

Viola Desmond, Beautician, Salon Owner, Beauty School Proprietor and Cosmetics Manufacturer was born in Halifax in 1914. She was petite, refined of speech, ladylike… and by the way, she was Black. Her barber father was Black, her mother was White, and at that time in history the family self-identified as “coloured”.

Having been denied entry to beauty schools in Nova Scotia because of her colour, Viola’s passion led her to Montreal and her initial training as a beautician, then on to Atlantic City and New York for more advanced education.  Returning to Halifax she blossomed as a beautician, an educator and a businesswoman.  Vi’s Studio of Beauty Culture was her client-facing salon while Desmond School of Beauty Culture fulfilled her need to teach Black students from Nova Scotia and two neighbouring provinces not only how to be hairdressers but also to provide them the skills to be valued employees or start their own salons.   Not content to be a beautician and a teacher, Viola extended her entrepreneurship into her own line of cosmetics. Sepia Beauty Products by Viola Desmond “Especially Blended to Enhance Dark Complexions”.

While driving to Sydney, Nova Scotia for business meetings In November of 1946, Viola’s car broke down in New Glasgow. Since repairs would take a long time, she went to the Roseland Theatre to watch a movie. As Viola was short-sighted she asked for a ticket in the lower level. She paid with a dollar bill, got her change and her ticket and then went to find a seat. A theatre employee told her that she had a ticket for the balcony and would have to move.  Viola went back to buy a ticket for the lower level but was told “I’m sorry but I’m not permitted to sell downstairs ticket to you people”.

Being ladylike manner and having a sense of decorum, Viola did not make a fuss but merely returned to where she had been seated. The ticket taker followed her to her seat and again asked her to move. When Viola politely refused, the manager demanded that she go up to the balcony.  When Viola still refused to move, the manager pointed to the ticket which said the theatre had “the right to refuse admission to any objectionable person”.

Viola’s perfect response was to inform the manager that she had in fact not been refused admission but had bought a ticket and was seated in the theatre.

When Viola refused to move the manager called a police officer who, together with the manager, physically dragged Viola from the theatre and took her to jail overnight.

Unlike South Africa and parts of the U.S., Nova Scotia had no overt segregation laws. In New Glasgow at least, undocumented segregation policies existed. Because there were no segregation laws in Nova Scotia, some creative thinking was needed to come up with a charge. Under the Theatres, Cinematographs and Amusements Act she was charged with fraud for failing to pay an amusement tax.

Viola had bought a ticket which included a tax. When told she was in the wrong section she went to buy an upgraded ticket but they refused to take her money. She would have paid 30₵ for the balcony which included 2₵ in tax.  A 40₵ ticket below included 3₵ in tax. To be clear, she was charged with failing to pay the 1₵ difference.

Viola was not advised of her rights to seek bail, to consult a lawyer, to set an adjournment to prepare or anything like that. It was not even a Crown Attorney prosecuting but only the theatre manager.  In His Majesty the King v Viola Irene Desmond Viola was found guilty and forced to pay a fine of $20 plus $6 costs.

The media soon learned of this, as did her local community. Viola’s appeal was unsuccessful due to certain technical deficiencies, but her support continued with the help of the Nova Scotia Association for the Advancement of Coloured People. This tiny, quiet and fashionable lady became a pillar of the N. S. Civil Rights community but is now recognized across Canada through her portrayal on the $10 bill.

Viola Desmond became a symbol of Civil Rights in Nova Scotia almost a decade before Rosa Parks did so in Montgomery, Alabama in 1955. 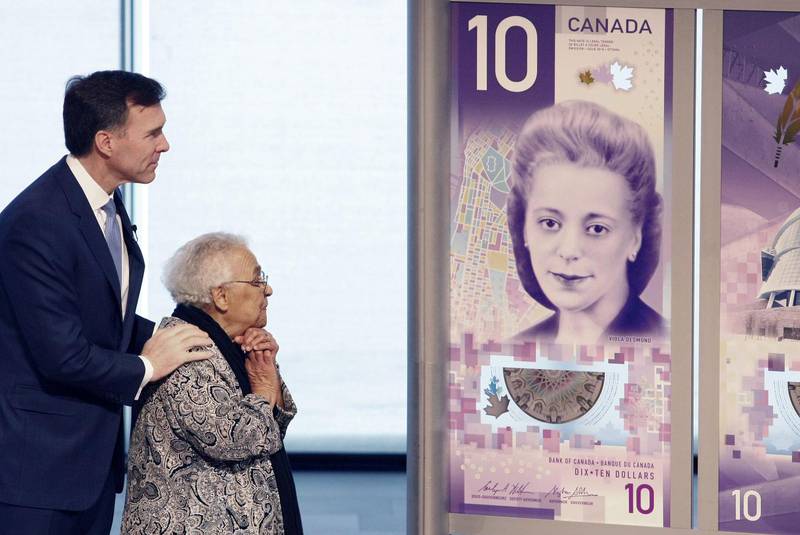 Viola Desmond refused to vacate her seat in an arbitrary “Whites Only” section of a theatre and Rosa Parks refused to give up her seat on the bus to a white man.  Both were arrested.

For those readers who are beauty professionals, Viola Desmond and Rosa Parks are your sisters. Put the new Viola Desmond $10 bill on your wall and share her story, her spirit and her passion.